We are Las Vegas Photographers and videographers that price ourselves on capturing real moments. We strive to provide quality photography services and cater to everyone.

We believe that everyone has a story to tell so we love photographing that and capturing it on film.

Michelle and Grant choose Red Rock Canyon as their wedding destination. Coming all the way from Canada, they wanted a desert wedding full of warmth, beautiful landscapes, and fun. Red Rock Canyon weddings are perfect for those couples looking to achieve beauty, privacy and adventure. 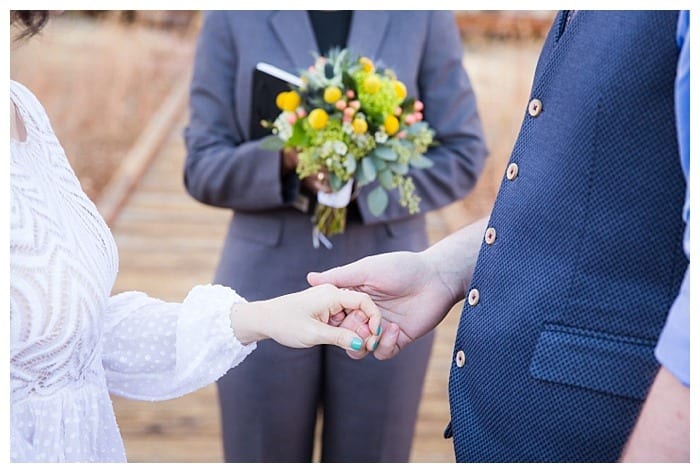 How did you two meet?

My cousin and I decided to go to a Halloween house party and Grant’s band was playing a show there.  Before his band played, we met, chatted, and flirted.  Who would have thought that a banana (Grant) and Frida Kahlo (Me) would ever have a love affair?  Grant didn’t text me the next day, he called!  A novelty in this era of dating.  We are of course married now but up to this point, we have spoken to/seen each other everyday ever since that Halloween night. 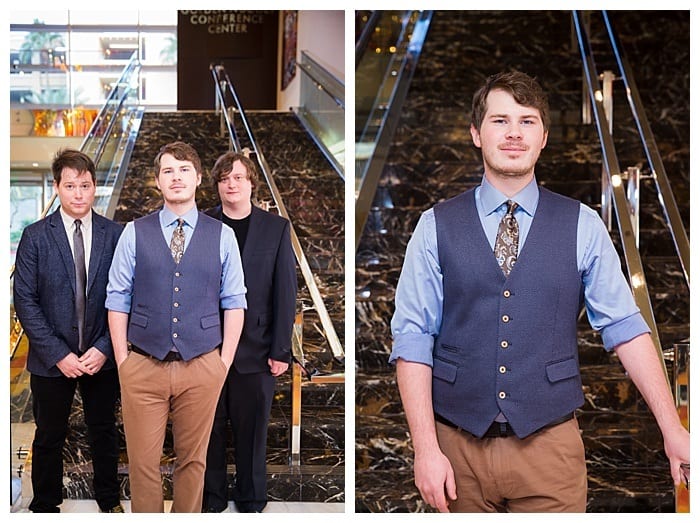 Why did you choose this particular venue or location?

At first, I was thinking kitschy chapel.  Isn’t that how weddings are done in Vegas?  Grant only agreed as long as Elvis would be our officiant.  I was sold until I googled “weddings in Las Vegas” and there it was, a gorgeous Red Rock Canyon wedding image.  Being from Toronto, Canada, I had never heard of the place and had no idea you could get married in the desert but was immediately enamored by it because I just happen to love deserts.  Deserts are beautiful.  Not only is the landscape phenomenal, but the life that exists in a sea of death and barren land is miraculous.  What a wonderful way to begin a new life, one of growth and love, even in the face of potential challenging terrain.  But also think, Kill Bill, Thelma and Louise and Fear and Loathing in Las Vegas.  The desert is such a romantic place but, it’s also badass. 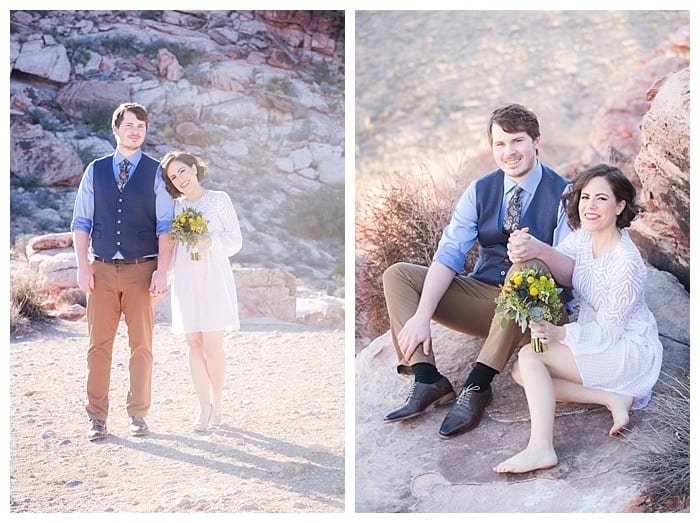 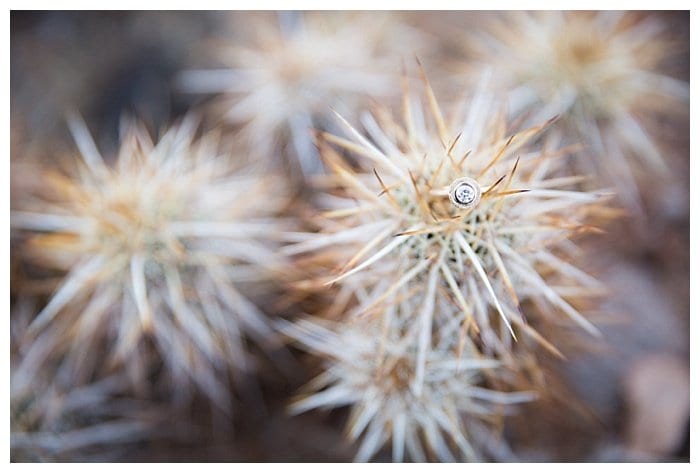 What is your vision for your wedding day?

In a nutshell, casual, easy and fun.  I felt that a ceremony in Red Rock Canyon already gave the casual vibe as opposed to a more traditional church and banquet hall wedding.  It did confuse my guests a little and I received a lot of questions about what they should wear, how formal/casual.  I wore a white BCBG cocktail dress and my husband wore a vest and tie which is as formal as I wanted it to be.  My 30 guests were flying into Vegas from various parts of Canada and so, I wanted to make sure that the wedding day would be easy for them which is why I rented (the largest?) party limo in Vegas – the Land Yacht.  Most of us stayed at the Golden Nugget which made it super easy for pick up and drop off.
Finally, I wanted to make sure that everyone had a great time!.  The Land Yacht had music (usually with a DJ but ours was sick that day) and a bartender with an open bar.  What’s better than a portable bar to get the party started?  The reception was a family style dinner at El Segundo Sol to keep things really social since the guest list was quite varied and not everyone knew each other very well.  We ended the night with a few more drinks at the perfectly kitschy 70’s diner, the Peppermill.  The ambiance in the lounge was retro cool and, myself nor any of my guests had ever heard or been there so, it was pretty special for everyone.  The Peppermill also has a happy hour between 9PM and 11PM so, that just kept the party rolling after dinner.
I had always wanted to have a Mexican fiesta-style wedding but knew that particular dream could probably only truely be realized in Mexico.  I think I achieved the closest thing to that by getting married in Red Rock Canyon and then having a family style dinner at a Mexican restaurant in Vegas with a Mexican tres leches two-tiered cake.

Have you had a favorite part of the planning process?

Yes, discovering all the things that I might love in Las Vegas for my wedding.  Finding Red Rock was probably the most exciting for me.  Once I had my heart set on Red Rock, I didn’t care about semantics, it was going to happen.  But, luckily, everything fell into place wonderfully. 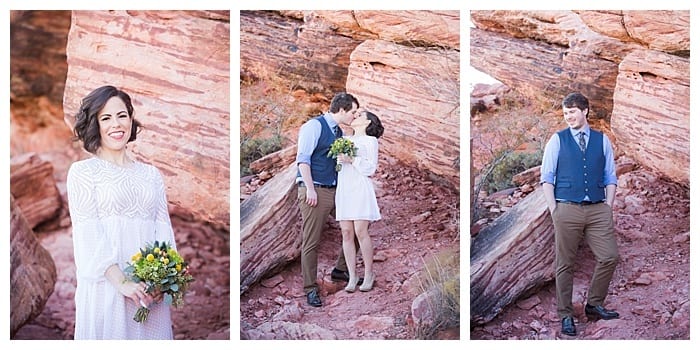 Do you have any advice for other couples planning their day?

1.  Do your research and do it extensively especially if you’re not exactly sure what you want.  There is so much and even more than you think available to you in Las Vegas so take the time to learn what’s there to ensure your wedding is truly unique and perfect for you.
2.  Check out reviews on various websites – I used Google, Yelp and The Knot.
3.  If a vendor is out of your price range, ask to see if things can be tweaked to make it work especially if you love their work.
4.  Don’t cheap out on your photographer!  I almost made that mistake and was going to book a ‘bargain’ photographer for $500-$600 but then realized that that was a really bad idea.  I had taken all this time to find the perfect officiant, location, hair and makeup company, dress, shoes, etc, and would be spending all this money so why on earth would I risk having bad photos?  Also, those photos would be the only tangible memories of my wedding day.  I am so happy that I finally found McKenzi.
5.  Planning can be overwhelming especially if you’re doing it far away from the wedding location.  Trust your gut feelings throughout the process because you will more than likely be right about them.  Send out inquiry emails to a handful of companies you like because their responses can be quite telling.  The majority of my decisions were made based on the responses I received from vendors.

6.  Have a budget but don’t get stressed out if you end up spending more than you wanted to.  But, of course, be reasonable about it.  Your wedding is a special day and in the grand scheme of your life, you won’t miss that money.  You’ll only be left with some amazing memories. 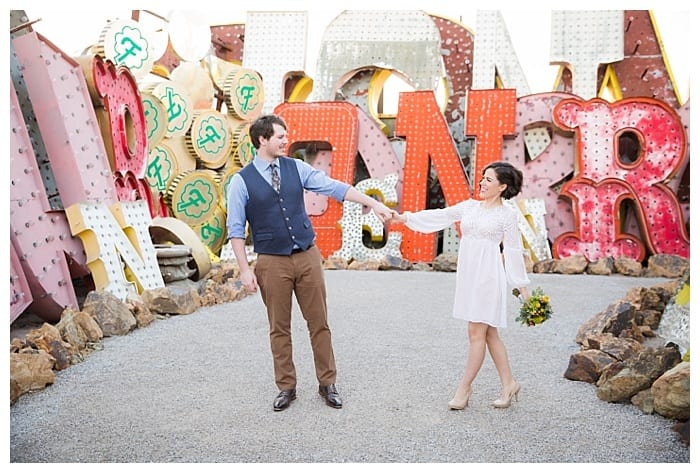 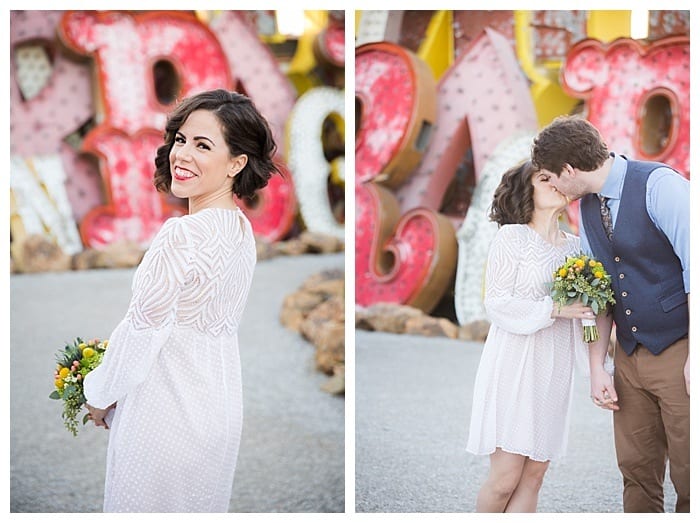